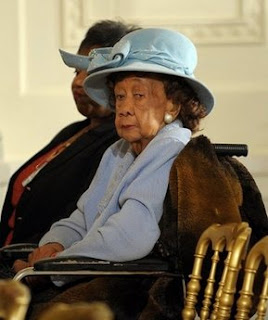 She walked the walk, with Martin. For 40 years she championed the cause of civil rights and woman's rights. She passed away at the age of 98. From the link:


As a teenager, Height marched in New York's Times Square shouting, "Stop the lynching." In the 1950s and 1960s, she was the leading woman helping King and other activists orchestrate the civil rights movement, often reminding the men heading the movement not to underestimate their women counterparts.

One of Height's sayings was, "If the time is not ripe, we have to ripen the time." She liked to quote 19th century abolitionist Frederick Douglass, who said that the three effective ways to fight for justice are to "agitate, agitate, agitate."

Height was on the platform at the Lincoln Memorial, sitting only a few feet from King, when he gave his famous "I have a dream" speech at the March on Washington in 1963.

Benjamin Hook also passed away last week. Both these individuals put their lives on the line to further the cause of civil rights for all people.

We have lost two of best within a weeks time. :( Their contributions must be remembered and lauded as they spoke truth to power when it was dangerous to do so.

Update: KO does a great piece on Ms. Height in the first half of the video below. Then, he talks about the horseshit the state of AZ is trying to pass for people of color..the color brown.