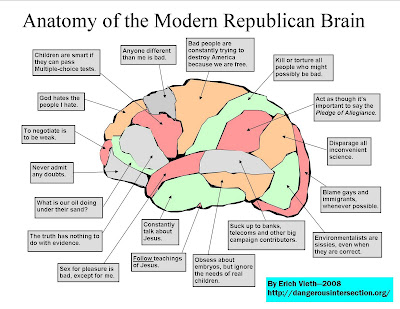 Romney didn't even have to show up to the Southern Republican leadership conference to take 24% of the vote to Palin's 18%.

Romney should also note that he only won by a single vote..Ron Paul came in second. From The Guardian:


Another potential candidate for 2012, the former House speaker, Newt Gringrich, secured a respectable 18% (321). Mike Huckabee, the pastor and broadcaster who won the Iowa caucus in the 2008 primaries, won only 4%, while Tim Pawlenty, the governor of Minnesota, took only 3%.

So the Rightwing Nutter Party is anything but united, which of course made me smile. The Rethugs biggest hold is below the Mason-Dixon line, so that is why I think this assinine poll deserves to be mentioned.

It's been a lousy couple of weeks here and smiling has been at a minimum. I did cackle when I saw Pawlenty's numbers. That fuckwit really needs to step the fuck up if he plans on running for Prez in 2012.

Below is a video of the neocons defending Palin. C&L has a nice writeup as well.