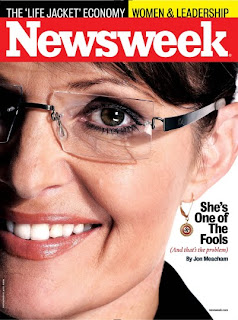 As in 12 million bucks..that is what she has earned since she quit her job as Governor of Alaska, or to be more specific...since July of last year. The spelling in the title is not accidental.

Holy fuckamoly...that is a lot of friggin moolah to pay a female that doesn't know a fucking thing, and spews more bullshittery than anyone else this side of Rush Limpballs.

Her salary as Governor of Alaska was a measly $125K.

From the ABC News article that broke this story:


That conservative estimate is based on publicly available records and news accounts. The actual number is probably much higher, but is hard to quantify because Palin does not publicize her earnings. She reputedly got a $7 million deal for her first book, with the bulk of that money due after her resignation as governor, and will earn about $250,000 per episode, according to the web site The Daily Beast, for each of eight episodes of a reality show about Alaska for the The Learning Channel. She has managed to keep a lid on reliable figures for her earnings from a multi-year contract with Fox News and a second book deal with HarperCollins.

Is she worth it? Hardly..But then I am not a mouth breathing, knuckle-dragging rightwing nutter.
This Bitchfest by Unknown at Tuesday, April 13, 2010