Is Palin 's endorsement the kiss of death? 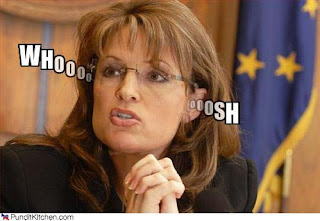 A NYT writer has his opinion up today regarding the Palin endorsements and how they have fared lately. From Timothy Egan:


Vaughn Ward, the Republican congressional candidate from Idaho, has the dubious character trifecta of the Palin brand: bone-headed, defiant and willfully ignorant. When told that Puerto Rico was not a country, he said, “I don’t care what you call it.”

On Tuesday, this Palin protégé was routed in a huge upset, despite a big early lead in the polls, a 6-to-1 fundraising edge and that Friday fly-in by the former half-term governor, who has Idaho roots.

A week ago, Palin backed a candidate for Senate in Washington state, Clint Didier, a former professional football player who also owns a farm and has railed against excessive government spending.

But at the same time Palin was calling Didier “a commonsense constitutional conservative [who] will help put our country on the right track,” it was revealed that he took at least $140,000 in federal farm subsidies. If having his hand out seems inconsistent with his bumper-sticker politics, it follows a familiar pattern of the Palin brand. In Idaho, Ward, the Palin candidate, also blasted government intervention in the private sector, even though his wife, the family breadwinner, earns her living through a mess kept alive by Federal bailouts — Fannie Mae.

As for the Palin brand, it seems to represent no consistent philosophy, no guiding principles, no remedial vetting. It stands for one thing — Palin — and in that sense, she does have a legacy, though it can only be measured in dollars.

That dear friends, is a mighty nice bitchslap of the Loser from Wasilla. It just made my day. It would be great if people finally started realizing that Palin is nothing more than a gold-digging dipshit who looks out for herself and no one else. Her lack of command of the English language, demonstrated by her ridiculously skewed logic speaks for itself.
This Bitchfest by Unknown at Thursday, May 27, 2010