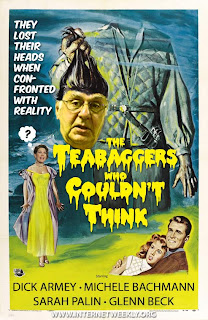 He calls them Tea Party 2.0 and he's right of course. His newest at RS is a great read. A short excerpt:


It's taken three trips to Kentucky, but I'm finally getting my Tea Party epiphany exactly where you'd expect: at a Sarah Palin rally. The red-hot mama of American exceptionalism has flown in to speak at something called the National Quartet Convention in Louisville, a gospel-music hoedown in a giant convention center filled with thousands of elderly white Southerners. Palin — who earlier this morning held a closed-door fundraiser for Rand Paul, the Tea Party champion running for the U.S. Senate — is railing against a GOP establishment that has just seen Tea Partiers oust entrenched Republican hacks in Delaware and New York. The dingbat revolution, it seems, is nigh.

"We're shaking up the good ol' boys," Palin chortles, to the best applause her aging crowd can muster. She then issues an oft-repeated warning (her speeches are usually a tired succession of half-coherent one-liners dumped on ravenous audiences like chum to sharks) to Republican insiders who underestimated the power of the Tea Party Death Star. "Buck up," she says, "or stay in the truck."

Gawd, I swear you could not pay me enough to attend a Sarah/Rand Paul get-together. My fucking head would explode.

He goes on to describe the crowd: White and crippled. No shit, they got a shit-load of hover-rounds and scooters there. wtf? They are all paid for by medicare...aka the federal government! And these fuckers bitch about big government and freeloaders? Fuck me running...

The best line in the piece:  But after lengthy study of the phenomenon, I've concluded that the whole miserable narrative boils down to one stark fact: They're full of shit. All of them. At the voter level, the Tea Party is a movement that purports to be furious about government spending — only the reality is that the vast majority of its members are former Bush supporters....

Read it, Taibbi never lets me down. Bless his little black journalistic heart. ;)
This Bitchfest by Unknown at Tuesday, September 28, 2010