Honor the Consciences of Our Veterans

Yesterday a 24 year old soldier, Corporal Brett Land was buried here in his hometown of Bakersfield. His life ended in the hell hole called Afghanistan. He was a wrestler in high school. He had people here who loved him. But he is just another statistic in our endless warmongering. From the local news link above:


Land graduated from Bakersfield High School in 2005. He joined the army three years later. While Land was in the service, he met his wife Sarah. They have a newborn daughter Rileigh, but Land never got to hold her in his arms. She was born three weeks before he was killed.

Someone tell me what the fuck is Happy about that????
I find nothing Happy about Veterans Day when we still have thousands of our citizens fighting and dying for a corrupt Afghan government and yes I am talking to you President Obama when I say check out the graphic below the video, courtesy of  Dark Wraith. . Video From BraveNewFoundation:

This isn't a Happy day, its a Solemn day, its a day to think about all those young lives snuffed out like a match stick or soldiers that will forever suffer from their injuries, including PTSD, in our forever wars that have nothing to do with freedom..Iraq and Afghanistan are about power and domination. This is how this anti-war person sees Veterans Day as long as even one of our soldiers is still in Iraq or Afghanistan: 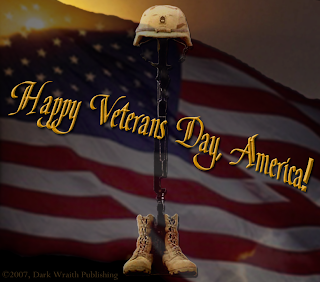 This Bitchfest by Unknown at Thursday, November 11, 2010