Will Aung San Suu Kyi be released? - Don't bet the farm on it. 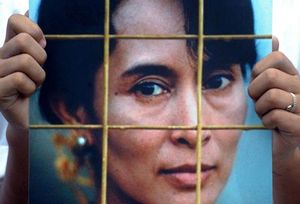 Her house arrest term is set to expire any day now. But the Burmese bastard Junta that runs the country is afraid of the power of this tiny and now elderly woman....so my guess is she won't be released. But her loyal followers still hold on to hope. From The Independent:


The military authorities who oversaw last weekend's controversial election have given no formal indication the 65-year-old will be released when her current term of detention formally expires tomorrow. Yet members of her National League for Democracy (NLD) have been cleaning their offices in anticipation and foreign diplomats are readying themselves for the opportunity to meet her. In Rangoon, said one Western diplomat, there was a "mood of hope, and yet expectation."

"I believe she will released on the evening of 13 November," said her lawyer, Nyan Win. "We have no plans for a celebration, but it will be a very happy occasion for our beloved Lady."

Many warn against such expectation. In Rangoon, where security is tight, the mood remains outwardly calm despite the anxiety of Ms Suu Kyi's supporters. Another diplomat said it was more likely that the Nobel laureate would not be set free. On previous occasions when she was due to be released, the junta changed its mind.

I have written 11 posts on the subject of Burma, Aung and the military junta douche nozzles that rule with a deadly iron fist there. If you wish to read or peruse them, just put Burma in the search box, or click here...but I digress. Since I am mostly a negative bitch, I feel this wonderful woman will still be held prisoner in her own house, probably until the day she dies or until the junta is overthrown....whichever comes first. The junta will gain nothing from releasing her. They do not care about the citizens of Burma, that is obvious...so why in the blue hell would they release her?

But deep down inside my soul...I hope that she is. I would love to be wrong on this topic, I really would.
This Bitchfest by Unknown at Friday, November 12, 2010