Wayne LaPierre is king of the douchenozzles. 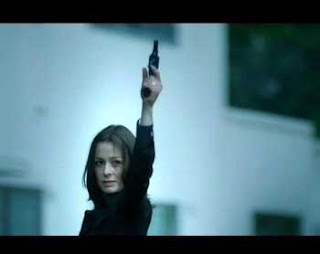 Ok first off, full disclosure, I own a handgun. I was raised in a house that contained them and used rifles regularly as my father was an avid hunter. Everything dear old dad killed, we ate.

Now, with that said..I have always supported more gun and ammo control measures both statewide and nationally. With today's 30th anniversary of the botched assassination of Ronald Reagan, it's a good time to bring up how far backwards we, as a nation, have come and gone on the issue of gun and/or ammo control and how nutjobs like John Hinkley,Jared  Loughner, Seung-Hui Cho and millions of other wingnuts can so easily get handguns with huge clips that can hold thirty-fucking-rounds of human slaughtering ammo.

Recently, Obama penned an OpEd on gun and ammo control. He stated that he wanted to have a nice, sit down meeting with the fuckwads at the NRA.

Wayne LaPierre said no way will he attend such a meeting. Wayne is the chief executive asshole for the NRA. In fact, here is the money quote from him via a NYT writeup on the subject:

“Why should I or the N.R.A. go sit down with a group of people that have spent a lifetime trying to destroy the Second Amendment in the United States?”

Oh yeah Wayne, you aren't paranoid are you? You don't play politics either I bet you friggin disgusting bag of sheep shit.

But the truth is that yes, Wayne DOES play politics about gun and ammo control. This toiletbowl turd also accused Obama of wanting the meeting purely for political reasons.

The biggest problem with our laws regarding guns and ammo is that the national registry is about as useful as tits on a bullfrog when it comes to screening out the wingnuts. All three of the sick fucks I named above were as batshit crazy as they come..yet all three legally bought guns and ammo.

Wayne and his friends at the NRA are nothing more than greedy fucks that lie their collective asses off when it comes to even the smallest measures aimed at keeping the batshit crazy killers away from guns and those high capacity ammo clips that hold thirty-fucking-rounds of bullets.

If we are honest with ourselves the majority of elected Democrats also want to run the other way every time someone mentions gun or ammo control....for purely political reasons. The next big election is looming large on the horizon and nothing stirs the NRA crowd up more than a change, or threatened change, in gun or ammo control laws.

Thirty years ago today, the godfather of all Republicans was shot. Yet, even Reagan didn't want tougher measures enacted. It was Jim Brady, Reagan's Press Secretary who was paralyzed by the bullet he took that day, that pushed into law, stricter measures that the Bush Administration and Congress allowed to expire in 2004.

But back to Wayne.  He will lie and lie and lie to his NRA membership, but one thing Wayne hasn't been able to change is the way Americans as a whole feel about gun/ammo control measures. From the ThinkProgress link:


A poll in the aftermath of the Tucson shooting found that Americans agree with Obama's approach, finding that large majorities support stricter background checks. Recent polling also found that "over 80% of public - including over 70% of gun owners - in Arizona, Colorado, Indiana, Ohio and Virginia, support tougher laws to keep guns out of the hands of dangerous people."

So, what does that tell you? What it tells me is that NRA members are very gullible and the nation as a whole is not.

But I guess it really doesn't matter as no one elected to national office or as a senator or congress critter is going to challenge the power of the NRA so that Americans will not have to fear a batshit crazy, gun-toting wingtard  showing up at their grocery store, college classroom, a federal park or any other place loaded down with an automatic or semi-automatic gun that can shoot and kill 30 humans within seconds of first squeezing that fucking trigger.

And that is wrong on many, many levels. It makes me madder than hell that politics is played by BOTH sides on an issue so important to the safety of Americans in public places.

Below is a trailer for the documentary called Living for 32. It is the story of Colin Goddard who was shot 4 times by the VA tech killer and how that horrific moment changed his entire life and made him a gun control advocate in memory of the 32 students killed by a nutter that could legally buy the guns that killed them.