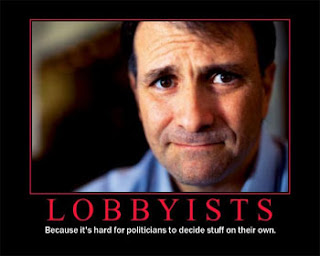 FromThe Center for Responsive Politics CNBC has gleaned enough information so that they can provide a decent writeup about The Corporatocracy and who is spending how much in the world of lobbying our elected congress critters:

Ranked by sector, the pharmaceutical and health industry topped the list with spending of over $62.5 million, followed by the insurance industry with just under $40 million and the oil and gas sector with $39.4 million in spending.

Don't you just love Democracy! Thank You SCOTUS for Citizens United...you fucks.
This Bitchfest by Unknown at Wednesday, May 04, 2011