Eric Cantor, our F*ckwit of the week.

After this douchenozzle's comments/statements about the tornado victims needing FEMA or federal help to overcome the horrific disasters that have been happening this month..we now have this week, if not this month's fuckwit..Eric Cantor. From the ThinkProgress link above:


President Obama pledged full support to the state Monday, telling survivors, “We’re here with you. We’re going to stay by you.”House Majority Leader Eric Cantor (R-VA), however, said that before Congress approved federal funds for disaster relief, it had to offset the spending with cuts to other programs. The Washington Times reports:


House Majority Leader Eric Cantor said Monday that if Congress passes an emergency spending bill to help Missouri’s tornado victims, the extra money will have to be cut from somewhere else.
“If there is support for a supplemental, it would be accompanied by support for having pay-fors to that supplemental,” Mr. Cantor, Virginia Republican, told reporters at the Capitol. The term “pay-fors” is used by lawmakers to signal cuts or tax increases used to pay for new spending.

In 2005, Republicans criticized then-House Majority Leader Tom DeLay (R-TX) for his willingness to fund relief in the wake of Hurricane Katrina by adding to the deficit. “It is right to borrow to pay for it,” he said at the time, explaining that cuts could “attack” the economy.

Even Hot-tub Tommy realized that help was needed when something this horrific happens to people where they live and by no fault of their own.

Why the fuck doesn't Cantor?

Because for him, these people are political pawns in his game against Obama and the deficit and/or the budget. For him it's political.

Yo..asshole..this is a moral issue. It has nothing to do with party lines or economics. These tornado's hit people from all income levels, all walks of life for christs sake. 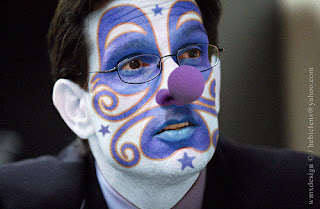 Besides being a fuckwit, Cantor is a clown..a disgusting clown. He has no moral high ground evidently. I just can not believe he would make such insensitive comments after such a horrific disaster that has so far taken the lives of 125 people in Joplin..on one afternoon in one town.

Tornado season has just begun and so far, it's looking like the worst since they started keeping stats..in 1950. It started in the friggin winter and it's only going to get worse. Today there are MORE of them landing..just turn on the weather channel or any 24/7 news channel and you can watch it live in living color Eric!

Denise at Pass the Doucheys has a good piece up on the same topic..but she also has photos and first person videos of the tornado, which btw, I could not watch. My son, who lives in tornado alley, has told me what these places look like after the tornado has passed through, the people standing next to what used to be their homes..even he was torn up and my kid doesn't get emotional easy...unlike his mom.

Enjoy this award Eric Cantor, no one deserves it as much as you do..no one..and gawd knows there are a shitload of fuckwits lately.
This Bitchfest by Unknown at Wednesday, May 25, 2011