GOP loses a few clowns in their circus. 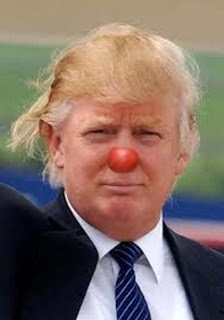 As Lawrence O'Donnell predicted, on the exact day mind you, Trump pulled out as soon as NBC renewed his stupid show Celebrity Apprentice. O'Donnell has been saying this for months and months..giving the exact day and under the exact conditions that it would happen. The man was spot on..watch:

Visit msnbc.com for breaking news, world news, and news about the economy

As an added bonus, Huckabee, the 'religious' extremist's favorite biblethumping liar, bowed out as well...although the asshole never really announced. This means the rightwing nutters that make up the majority of Iowa voters won't have Ole Huck to vote for this season..oh the agony! What the hell will they do? Santorum boys and girls..Ricky Santorum if he ever collects enough cash to actually announce his candidacy. If if Ricky doesn't announce..those rightwing nutters in Iowa are screwed..YAY! 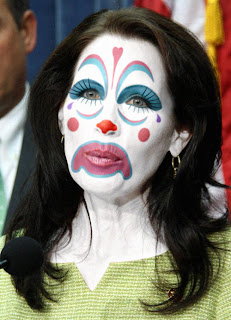 What will the GOP do without two of their biggest male clowns running for President? I say male because Batshit Bachmann (still testing the waters) and the Palinator are the two big time female clowns and they haven't announced yet. Oh please....please..let them announce soon! Both are pure comedy gold. But i digress...

Mitch Daniels is still waiting for his first and now second wife's permission to run.She will really help him out as she walked out on his ass and left him holding the bag along with all the kids. She eventually returned after the guy she left Mitch for divorced her. Mitch remarried her. Mitch might let her wear the pants in the family but he hates unions and he really hates Planned Parenthood and will do anything to kill them both so long as the moves don't fuck up his run for President..that is if the wife lets him.

We do still have the fuckwit Rick Santorum to kick around. That dipshit actually showed up to the Faux Rethug debate.