GOP eats it own Presidential candidate, the one closest to the center of course.

Eye of Newt was trying to be less rightwing nutter and more centrist, or even....gasp..moderate when he was on Meet the Press (transcript here) this past weekend. The money quote that is getting more press than anything else I think he said Sunday:

According to most if not all political pundits, his run for the Presidency is over, less than a week after he started. That was all that was talked about today on the MSNBC political shows and probably all other news network shows. At least it was the prime story of the day for Tweety, Cenk. O'Donnell, Maddow, Ed and all the rest of the early day/evening shows on MSNBC. The biggest video of the day was Eye of Newt doing a handshake campaign and a rightwing nutter holding on to his hand as Newt tried to escape..all the while, the guy was tearing into Newt. Of course he was an Iowa voter, the most rightwing nutter group of all Republican voters:

I actually feel sorry for the fuckwit I call Eye of Newt. He sounded like more of a centrist Republican than ANYONE else running or threatening to run for President in that party of Corporate Ass-kissers. He sounded sane and logical, for a Republican...which of course pissed off the teabaggers and anyone else that wants to take the Republican party as far right as possible...like just about everyone with an R behind their name lately or that is a mouthpiece for the extremist rightwing ideology..aka Limbaugh and the all the rightwing pundits on tv, radio and in print. Fox News went batshit over it all day I believe..since I don't watch than non-news, Republican talking points only, station I can't say for absolute certainty..ok? For a catch-all of everyone that took a shot at Eye of Newt, including the dipshit emeritus Charles Krauthammer check out this link from this morning's FirstRead or just Google  Republican reaction to Newt Gingrich on Meet the Press.

His other big boo-boo? Taking Paul Ryan's bullshit idea of ending Medicare as we know it, and calling it " too big a change". All the rightwing fuckwits are of course taking this phrase as heresy. So, when he said, and I quote:


I don't think imposing radical change from the right or the left is a very good way for a free society to operate.

All the nutters took it personal and said he was calling Ryan's entire plan radical.

Well, it fucking IS radical and not to the good..Christ, you don't have to be a damn rocket scientist to see that in Ryan's budget 'plan' as he slashes programs that help the sick, poor, elderly, etc and then actually gives another tax break to the uber rich.

They, the rightwing elected and the rightwing pundits, were probably pissing down both legs I suspect when they either read or heard Eye of Newt say both sets of phrases above. 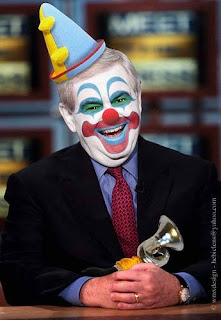 He called Paul Ryan and begged for forgiveness. Eye of Newt is now pulling a Palin saying it was a 'Gotcha' question and taken out of context. He is blaming those damn liberals too.

No jackass, it wasn't. Read the fucking text of your little sitdown w/ David Gregory. You couldn't shut the fuck up. You didn't answer in sentences, you answered in paragraphs you friggin moron.  You have been on that show 35-fucking-times..I am quite sure you are used to how it works and how questions are framed.

And that makes you a pathetic fuck in my book.

Say Good Bye Newt, your campaign is over according to pretty much anyone that has an opinion on you and your 5th run or 10th run for President of the United States..its been so many, I forget the total number.
This Bitchfest by Unknown at Tuesday, May 17, 2011