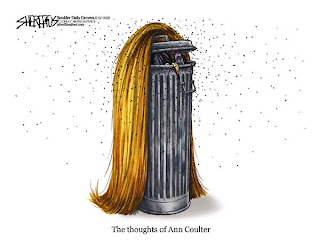 Thanks to Crooks and Liars we get the video of this nasty skank/publicity whore/wanna-be-author talking about about Olbermann. The group of rightwing nutters who go by the name of Media Research Center give out an award they call: Ode to Keith Olbermann. Their whole shtick has a name: Dishonor Awards Ceremony. They appear to be a school for rightwing lunacy...and Coulter must be one of their alums.

Evidently only they speak the truth..right..and Brad Pitt will be home shortly and I will make mad passionate love to him after we eat lunch. From Heather's piece at C&L's VideoCafe:


For anyone who's up to watching the entire thing it's posted on C-SPAN's site here -- Dishonors Awards Ceremony. Here's their description of the event:


The Media Research Center held its annual gala to roast media they feel show liberal bias with "DisHonor Awards." Ann Coulter, Neal Boortz, Andrew Klavan, and a Who's Who of national conservative leaders will participate in the 2011 Dis Honors awards roast hosted by Brent Bozell and the Media Research Center. The Outlaws will provide live entertainment and Cal Thomas will receive the William F. Buckley Award for Media Excellence.

And of course what would one of these events be without giving Ann Coulter a chance to pretend she's still relevant and to spend some time trashing Keith Olbermann. Ann's criticism basically boiled down to calling Olbermann a girl, stupid, getting in a fat joke on Michael Moore and trashing his new upcoming show at Current TV. She also gave him credit for contributing to Scott Brown being elected after he did one of his special comments about him, as though the terrible campaign run by Martha Coakley had nothing to do with that. Yes folks, Keith Olbermann apparently is presonally responsible for Scott Brown being elected in Massachusetts because he did a special comment on him at MSNBC if you live in Ann Coulter and The Media Research Center's world.

Coulter of course couldn't get her stories straight has she said KO had the smallest audience on MSNBC.  Right again Annie..you dipshit.


There is also a video of the elected fuckwad Steve King running his piehole, but gawd knows I won't put that one up..the man is so far to the right he is off the charts..mentally and morally-speaking of course.
This Bitchfest by Unknown at Tuesday, May 31, 2011