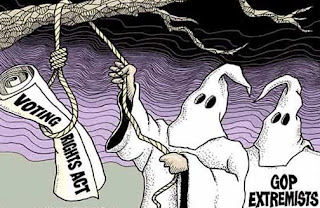 Thanks to the wonderful folks at Crooks and Liars, specifically David, we have video of this fuckery below..but first..my bitchfest on the subject.

This crap passed on a 19-5 vote. The five were of course Democrats, many of the other Dem's refused to vote for this bullshit bill that jackass extraordinaire Gov. Scott Walker says will prevent voter fraud...like they really have any cases of individuals using other individuals names to vote, because in the entire history of WI They. Do. Not. From the WI State Journal:

Amid chants of “Shame!” and “Recall!” from the gallery, the state Senate on Thursday gave final approval to a controversial bill requiring voters to show photo identification at the polls. The measure now heads to Gov. Scott Walker, who said he plans to sign it next Wednesday.

“Requiring photo identification to vote will go a long way to eliminate the threat of voter fraud,” Walker said. “If you need an ID to buy cold medicine, it’s reasonable to require it to vote.”

Republicans in the state Assembly passed the bill in a late-night session last week. Debate in the GOP-controlled Senate began Tuesday, running until after 1 a.m. Wednesday, when Democrats used a procedural move to delay final passage.

On Thursday, Senate GOP leaders limited floor debate to one hour. Senate Majority Leader Scott Fitzgerald, R-Juneau, defended the time limit saying the topic “has received a lot of debate,” and Democrats had had plenty of chances to speak on the floor.

These Wisconsin rightwing nutters really are disgusting fucks. And you know they are trying to prevent certain types of people from voting..its a no brainer, fer christs sake.

When do those recall votes start up? Come WI. residents..get a move on and toss these fuckwads out!