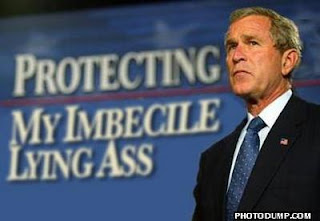 I am calling bullshit on Bush and his excuse for not attending, what I consider, Obama's politically helpful appearance at Ground Zero recently (Pres.Clinton was also invited and cited conflicting events). Seems the man has been quite busy lately making some cold, hard cash (estimates are $15 million total since leaving office)..in a very public way. For starters, The Shrub made three speeches shortly following Obama's Ground Zero request. One was to his buddies at a hedge fund, another at a golf event and the third was to a Swiss bank that got slapped around for keeping secret bank accounts after that was considered a big no-no.


David Sherzer, a spokesman for the former president, told iWatch News that since Bush left office he has delivered almost 140 paid talks, at home and abroad. Those speeches have earned Bush about $15 million, a conservative estimate, following in the golden path blazed by his predecessor, Bill Clinton.

Almost all of Bush’s speeches are closed to the press. Bush uses the Washington Speakers Bureau to arrange his paid speaking gigs.

To some presidential historians, Bush’s numerous high-priced speaking engagements don’t sit well. “I find it puzzling,” said Stanford University historian Robert Dallek in an interview with iWatch News . “He says he wants to keep a low profile. What is he doing except enriching himself? It sounds like it’s self-serving. It’s following the good old American adage to make as much as you can.”

Other historians say Bush’s ride on the lecture circuit has become somewhat commonplace for former presidents, but is still troubling.

“It’s one thing to stay out of the public realm, which George Bush has said he wants to do,” Julian Zelizer, a presidential historian at Princeton University, said. “But then he goes on the speaking circuit and makes enormous amounts of money giving lectures mostly to corporate groups and other select audiences. Some Americans can find this distasteful.”

Zelizer added, “We’re in an era where there are countless fears about money and politics. I think former presidents have to be careful about what they’re doing with their speeches. For some people it’s another version of the revolving door between Capitol Hill and K Street.”

I love the last quote...it's another version of the revolving door between Capitol Hill and K St.  Bush43 and his cronies adored K street. Still do.
This Bitchfest by Unknown at Friday, May 20, 2011