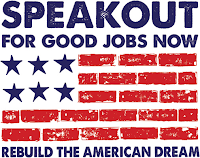 The mission of the CPC (Congressional Progressive Caucus) with this nationwide event is two-fold. To listen to the public and their needs AND to let them know that as far as the CPC is concerned, Jobs is the number one issue in our nation, and they plan to shift the debate in DC and specifically the House of Rep's to that important national problem and find a resolution for it in this recessive economy that affects all of us in one way or another . From TPMuckraker, the leader of the caucus, AZ Rep Raul Grijalva:


Republicans have pulled off a neat trick since taking over the House back in January -- they've repeatedly attacked President Obama on the languishing job market while shifting government focus away from job creation and toward the deficit and debt.

Now, the House Progressive Caucus is planning to turn the government's attention back toward eliminating unemployment. Starting Wednesday, caucus members will fan out across the country on a summer tour that will attempt to push the focus away from spending reduction and toward using government resources to create jobs.


"The media and the right wing and, of course, some Democrats have been talking about intangibles like the debt ceiling or the job picture," Congressional Progressive Caucus co-chair Raul Grijalva (D-AZ) told TPM in an interview previewing the announcement. "We wanted to do a tour that really talks about what matters to people."

This tour will run through the summer and hit 14 cities. The leader of the Caucus doesn't mince words when it comes to taking Obama, the House and Senate to task. Again from the TPM writeup:

To Grijalva and the CPC that means discussing a government that makes "a commitment to the middle class" and pushes for an economic package that focuses on middle and working class people -- "not just the wealthy and not just the CEOs," Grijalva said.

Earlier this year, the CPC put forward their own federal budget proposal that raises taxes on the rich and corporations (as well as ends the wars in Iraq and Afghanistan) and plows the increased revenues into new education, health care and other middle class-focused domestic spending.

That's the kind of government Americans want, Grijalva said. He faulted the White House and other Democrats for veering away from the kind of solutions the CPC intends to highlight on the tour and driving the national agenda headlong into the Republican-friendly territory of tax decreases and spending cuts.

"I think it comes from being timid," he said. "It really does. Part of job creation, historically how we've gotten the economy back on its feet is that the federal government stepped in and supplemented job creation...and here we're sitting around, still talking about the possibility of job creation in some amorphous way."

Timid..he hit the nail squarely on it's head with that one, although my word for their lack of action is harsher: spineless. The Democratic Party and Obama left their balls in their other suit pants when it comes to pushing their agenda the last two plus years. When they had control of both houses, they got nothing that they wanted for the most part..and spent too much time dickering over Health Care Reform..completely eliminating Universal Healthcare as an option from the get-go.


The stops will feature members of the CPC sitting down with workers to hear about the employment situation and how it can be improved. Some events will be town halls, some will be rallies, some will be hearings and all will be open to the public. The caucus has been planning the tour in secret for months, and say that it could help shift the focus back to job creation and away from the federal bottom line.

Get out there and then get back to DC and fix it..it's a goal we all want, party lines be damned.

To see if they will be in your vicinity the name of the tour is Speak Out for Good Jobs Now. Their website is here with all the info you need.

Below is Rep Keith Ellison talking to Dylan Ratigan yesterday about the national listening tour. I really admire Keith Ellison, the man isn't afraid of speaking truth to power.

Visit msnbc.com for breaking news, world news, and news about the economy
This Bitchfest by Unknown at Wednesday, June 15, 2011