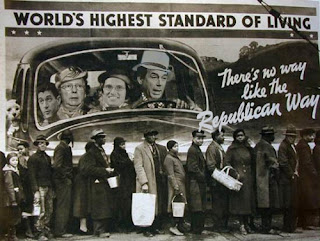 Peter A. Diamond won the most recent Pulitzer for Economics. MIT thinks he is golden as does Obama. So why in the blue hell do the elected idiots in the friggin GOP refuse to approve his nomination for The Fed?

Doesn't matter anymore, really, because Mr. Diamond issued a very polite, but nonetheless, a Fuck Off and Die OpEd to the assholes with the R's behind their names when he withdrew his nomination today. From his OpEd:


LAST October, I won the Nobel Prize in economics for my work on unemployment and the labor market. But I am unqualified to serve on the board of the Federal Reserve — at least according to the Republican senators who have blocked my nomination. How can this be?

The easy answer is to point to shortcomings in our confirmation process and to partisan polarization in Washington. The more troubling answer, though, points to a fundamental misunderstanding: a failure to recognize that analysis of unemployment is crucial to conducting monetary policy.

The Party of No does not want to lower the unemployment rate, nor do they want anyone with actual experience and/or leadership qualities to be on a board or head a department under President Obama.

Mr. Diamond's nomination has been up for a fucking year. He got tired of waiting..can anyone blame him? Again from his scathing OpEd:


But we should all worry about how distorted the confirmation process has become, and how little understanding of monetary policy there is among some of those responsible for its Congressional oversight. We need to preserve the independence of the Fed from efforts to politicize monetary policy and to limit the Fed’s ability to regulate financial firms.

He also uses my favorite word when describing the R's in committee..LOCKSTEP. Those fuckwads would walk in lockstep over a cliff without blinking a friggin eye if Cantor or Boehner told them to do so.

You and I know what they want..a pro-business lackey that will push the interests of The Corporatocracy. The GOP could give a shit if the economy gets better..in fact they are praying for the opposite.

Two seats are still open on The Fed. It appears they will remain that way for the rest of Obama's current administration.

Meanwhile, the R's are getting a hard-on over the fact that the unemployment rate jumped up to 9.1.
This Bitchfest by Unknown at Monday, June 06, 2011