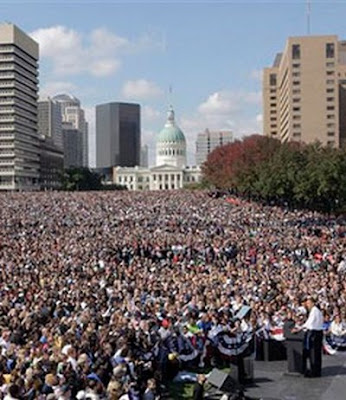 I can't believe it. I really can't. It warms the cockles of my lil black heart don't ya know? From TruthOut via UK's Daily Mail:

The senator who became the first black man to become a candidate was cheered on by more than 100,000 people in St. Louis, Missouri.

"All I can say is wow," he said as he took the stage in his latest bid to woo voters in the key battleground state.

Every four years, Missouri commands attention because of its bellwether status. It has voted for every presidential winner since 1900, with the exception of 1956.

The Illinois Democrat has drawn big crowds all through his contest with John McCain, who Mr Obama now leads by up to 14 points in nationwide polls.

In May the 47-year-old attracted about 75,000 to an event in Portland, Oregon before that state's primary election.

And in the German capital, Berlin, he drew more than 200,000 during a foreign tour in July.

It IS a big deal for a candidate to draw this many people, look at that picture...people for as far as the eye can see.

John McCain is bragging about 20,000 but he neglects to tell you that also on stage is a well-known country and western singer.

The article also includes the transcript of Obama's speech to the Missourian's. It's a good read for a Sports Sunday m'dear reader.
This Bitchfest by Unknown at Sunday, October 19, 2008