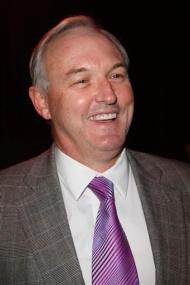 And within hours of doing so...was tarred and feathered by his fathers magazine, the National Review. From AP:

A week after endorsing Democrat Barack Obama for president, Christopher Buckley, a writer and son of William F. Buckley Jr., is leaving National Review, the conservative magazine founded by his father more than 50 years ago.

"Within hours of my endorsement appearing in The Daily Beast it became clear that National Review had a serious problem on its hands," Buckley wrote in a blog posted Tuesday on http://www.thedailybeast.com, the online broadsheet founded by Tina Brown.

"So the next morning, I thought the only decent thing to do would be to offer to resign my column there. This offer was accepted — rather briskly! — by Rich Lowry, NR's editor, and its publisher, the superb and able and fine Jack Fowler."

Buckley, a best-selling novelist who had been a featured columnist at the National Review, infuriated conservatives last week by declaring himself "the latest conservative/libertarian/whatever to leap onto the Barack Obama bandwagon."

He criticized Republican John McCain as "irascible and snarly" and credited Obama with having "a first-class temperament and a first-class intellect."


Tags: Christopher Buckley
This Bitchfest by Unknown at Tuesday, October 14, 2008