The state is Louisiana, which isn't surprising in and of itself. From RawStory:

KTBS reported that De Soto Middle School student Dawn Henderson was ordered to go home after refusing to remove a shirt with the text "Some Kids are Gay. That's OK."

De Soto Middle School Principal Keith Simmons said he sent her home because her shirt was a distraction to other students.

"Students do not give up their free speech rights at the schoolhouse gate," ACLU of Louisiana Executive Director Marjorie R. Esman said in a letter to Simmons. "To allow students to express one kind of opinion but not another is the very definition of censorship, and it violates the Constitutional rights of students like Dawn Henderson, who may have views different from those of her school Principal."

"Schools should encourage discussion of issues of public concern, and especially issues about which there may be conflicting opinions," Esman continued. "Sending Dawn home for wearing a shirt with the word ‘gay’ on it not only trampled her right to freedom of expression, but also sent a destructive message to all students that there is something wrong with being gay or even saying the word 'gay.' A school is the best place to encourage young people to share opinions."

In a similar incident, the ACLU of Illinois defended the free speech rights of Neuqua Valley High School students who wore shirts that said "Be Happy, Not Gay." The 7th U.S. Circuit Court of Appeals ruled in early March that a "school that permits advocacy of the rights of homosexual students cannot be allowed to stifle criticism of homosexuality."

This also goes to the point that the ACLU does represent unpopular causes, like the IL student that appears to not like gay people. Whatever your pov is on the ACLU, they are there to protect everyone's rights..and that is a good thing, as even homophobes have the right to express their opinions...unless it's the idiots at Westboro, then you won't find me supporting their right to hate speech and picketing innocent soldiers funerals and verbally brutalizing the family that is trying to mourn their dead child.  The first amendment right does NOT trump all other rights in my humble yet noisy opinion.

Below is a photo of Dawn in her Tshirt, courtesy of TheDailyMail and KTBS. 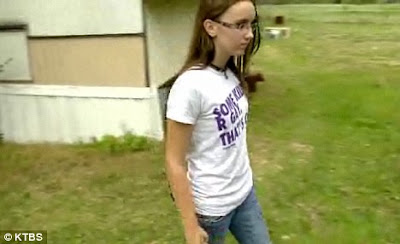