It's not jobs that are important, its outlawing reproductive choice people!!! 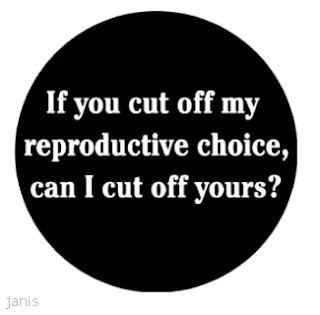 Last night Rachel did a great piece on the new S.Dakota law (pdf) that, for the most part, outlaws abortions in the state....or makes it as hard as humanely possible to get what is a legal medical procedure. You are gonna just love this newest fuckery folks..it goes right along with their 2006 bill that did everything possible to outlaw abortions as well, although it was repealed a year later. Although I was drugged up to my brown eyes, it made me sit the hell up (painfully) and take notice. WTF? How can this be? What in the blue-friggin-hell did SD Governor Dennis Daugaard sign and why?

The new law has placed limits and criteria that must be met by the pregnant woman before she can get her legal medical procedure. First, she has to attend a consultation with an anti-choice pregnancy (cough) help center that actually tries to disguise that it's an anti-choice center.

Then, she must wait an additional three days before getting the legal medical procedure if the assholes at the anti-choice center/group haven't scared the shit out of her. From a NYT piece on this crap:

A law signed by Gov. Dennis Daugaard on Tuesday makes the state the first to require women who are seeking abortions to first attend a consultation at such “pregnancy help centers,” to learn what assistance is available “to help the mother keep and care for her child.”

The legislation, which passed easily in a state Legislature where Republicans outnumber Democrats by more than 3 to 1, also establishes the nation’s longest waiting period — three days — after an initial visit with an abortion provider before the procedure can be done. It makes exceptions for medical emergencies, but not for rape or incest.

Many states require counseling from doctors or other clinic staff members before an abortion to cover topics like health risks. What makes the new South Dakota law different is that the mandated counseling will come from people whose central qualification is that they are opposed to abortion.

This whole bit of bullshit goes to what the GOP thinks is THE most important thing to get done this year.

It's not about the economy, the recession or about creating jobs. It's about stopping a woman's right to choose. It's about outlawing a legal medical procedure for the rightwing nutters in both the federal and state governments.

24 States have or are currently attacking a woman's right to choose, also known as reproductive rights, by requiring them to attend 'counseling' sessions at anti-choice centers. The Guttmacher.org site lists them all here.  The site also provides a plethora of information about all the actions being taken to outlaw what is a legal medical procedure. Read the following and get pissed:

 7 of the 20 states that include information on possible psychological responses to abortion describe only negative emotional responses.

It's an all out war on women and their reproductive rights folks..and it's just begun. Lets give a big thank you to all the fuckwads that elected this crop of rightwing GOP nutters who think controlling women is far more important than creating jobs or righting our economic ship.

And they tell us they want smaller government. Lying sacks of shit....

Visit msnbc.com for breaking news, world news, and news about the economy
Crossposted at that fine new group blog RoundTable7
This Bitchfest by Unknown at Wednesday, March 23, 2011