Pelosi has a set of balls..at least on occasion.

The topic du jour was Medicare. From The Prospect:


Finally, however, Democrats look to be stepping up to the plate to match Republicans’ fury to gut Medicare with an equal fury to save it, a position likely to have far more sway with the 84 percent of voters who oppose changes to the program. This afternoon, Nancy Pelosi drew the line in the sand the left has been clamoring for, promising “no benefit cuts.” Democrats have also enlisted Health and Human Services Secretary Kathleen Sebelius to spread the message on Capitol Hill today that proposals within Ryan’s plan will cut the benefits of current seniors, despite the fact that full Medicare privatization only begins in 2022. For instance, by undoing the prescription doughnut-hole benefits of the Affordable Care Act, the plan would leave seniors to cover a huge tab on their medication. For the 150,000 seniors in Rhode Island, this would amount to an additional $9.5 million annually.

Democrats are also circulating disturbing projections from the Center for Economic and Policy Research that projects an adult currently between the ages of 45 and 55 will have to pay $182,000 extra for health insurance under Ryan’s plan, despite having paid into Medicare for a half decade or more. This extra burden won’t just stretch budgets. $180,000 is more than a minimum-wage earner would make in five years, let alone save. It shows once and for all that the Ryan plan doesn’t save Medicare, it ends it, and it doesn’t help the seniors of today or the next generation.(emphasis mine)

Anyone that thinks doing away w/traditional Medicare is a good thing must be either rich or uninformed in my humble yet vocal opinion.  From the CEPR press release on their own report:


“The Ryan plan does nothing to control private-sector waste in health care costs,” said David Rosnick, an author of the report.  “As a result of the waste in the private system, beneficiaries will end up paying substantially more for Medicare, in effect paying a hefty new tax on their health care.”

The report, “Representative Ryan’s $30 Trillion Medicare Waste Tax,” documents the potential effects of replacing Medicare with a system of vouchers or premium supports and raising the age of eligibility from 65 to 67 as suggested in the Ryan plan, which was passed by the House of Representatives with almost unanimous support from Republicans and no votes from Democrats. The authors note that each voucher under the plan will initially be worth $6,600, but would be frozen at this amount over the program’s 75-year planning window, paying less and less of a beneficiary’s health care costs over time.

In addition to comparing the costs of Medicare to the government under the current system and under the Ryan plan, the authors also show the effects of raising the age of Medicare eligibility. The paper also demonstrates that while Ryan shifts $4.9 trillion in health care costs from the government to Medicare beneficiaries, this number is dwarfed by a $34 trillion increase in overall costs to beneficiaries that is projected based on the Congressional Budget Office’s analysis.

More and more of the R's seem to be backing away from Paulie's Medicare Plan, so the D's need to make hay out of this boondoggle now and continue to use it as one of their main examples of how the R's want to 'do business' and cut entitlements, the EPA, Dept of Education and other federal departments so they can continue to provide tax breaks and/or lower the tax rate for the uber rich if they run thewhole  show..aka the House, The Senate and the Oval Office. 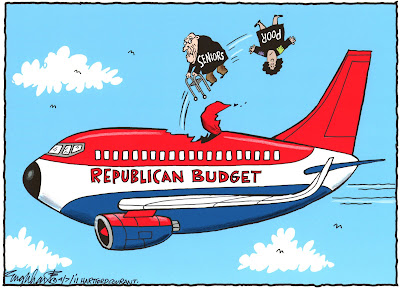