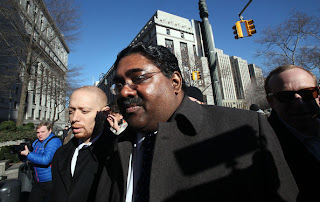 Finally, one of these s.o.b's is found guilty. Huzzah! From MSNBC:


Galleon Group hedge fund founder Raj Rajaratnam has been found guilty on all counts in a high-profile insider trading trial. The verdict was announced Wednesday morning in New York.

A New York City jury had been considering the fate of the wealthy hedge fund boss accused of insider trading for around a week.

Rajaratnam, the founder of Galleon Group, was on trial in federal court in Manhattan on 14 counts of conspiracy and wrongdoing. He faces up to 25 years in prison.

So far, all of these types of federal or civil cases have been either tossed or they were found not guilty.Except ole Martha Stewart of course. Raj is quite the plump person so he isn't gonna like prison at all as the food isn't what he is used to. That is IF the judge gives him a prison sentence.
This Bitchfest by Unknown at Wednesday, May 11, 2011