Suidicial thoughts rise through the roof for military.

A report by the military itself has raised my hackles. As someone who had a beloved niece serve in Afghanistan, prior to Obama's move into the Oval Office, I am appalled and quite pissed at the numbers. The following quote from page 8 of the report tells us a lot:


In contrast to recent prior years, in 2010 there were more hospitalizations for mental disorders than for any other major category of illnesses or injuries (per the ICD-9-CM).

Page 23 of the report has the following subject, or header: Hospitalizations with primary (first-listed) or non-primary diagnoses of “suicidal ideation” (ICD-9-CM: V62.84), active component, U.S.Armed Forces, 2005-2010.

The results should be interpreted with consideration of several factors that may aff ect the completeness of reportingof “suicidal ideation” among active component members. For example, the results may reflect at least in part increased awareness of and concern regarding suicide prevention among unit commanders, other front line supervisors, and primary care providers; increased awareness and use of the relatively new ICD-9-CM diagnostic code that specifies “suicidal ideation”; decreased barriers to and perceived stigmas associated with care seeking for mental health concerns; and so on. 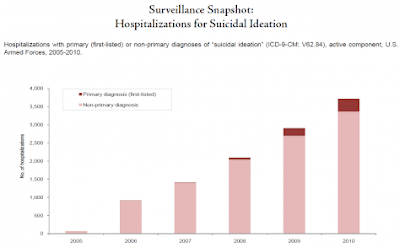 It sucks, to put it mildly..it's horrifi,c the rate of soldiers thinking about killing themselves has risen over five years. Look at it..look at it hard m'dear reader...the numbers climb out of site don't they? And these are just the soldiers that say something to someone. It doesn't include those that silently suffer and think about killing themselves before they fall asleep at night..or watch a buddy die. From a Time magazine writeup on this same report:


The experience of combat itself may also play a role. "Combat increases fearlessness about death and the capability for suicide," said Craig Bryan, a University of Texas psychologist, briefing Pentagon officials in January. The combination of combat exposure and ready access to guns can be lethal to anyone contemplating suicide. About half of soldiers who kill themselves use weapons, and the figure rises to 93% among those deployed in war zones.

Bryan, a suicide expert who recently left the Air Force, says the military finds itself in a catch-22. "We train our warriors to use controlled violence and aggression, to suppress strong emotional reactions in the face of adversity, to tolerate physical and emotional pain and to overcome the fear of injury and death," he told TIME. While required for combat, "these qualities are also associated with increased risk for suicide." Such conditioning cannot be dulled "without negatively affecting the fighting capability of our military," he adds. "Service members are, simply put, more capable of killing themselves by sheer consequence of their professional training.

It's maddening..its horribly sad and scary for me. It's something that is so hard to spot, to deal with in civilian life...in military life..on the front lines...it has to be just friggin impossible at some point, as the suicide expert states..its a friggin Catch-22.

The multiple deployments is a main culprit...it has to be. Who in the blue hell can deal with the death and destruction over there over and over and over again without going off the deep end?. I don't give a rat's ass that they get a year between deployments;...that's bullshit for me. Again from the Time article:


Chiarelli has singled out abuse of alcohol and prescription drugs by soldiers as a mental-health issue that can lead to suicide. "I think there's a link to substance abuse in some of the issues we're seeing," Chiarelli said last month. A recent Army study shows that the percentage of soldiers in Afghanistan taking antidepressants and other mental-health drugs nearly tripled — from 3.5% to 9.8% — between their first and third deployments.(emphasis mine)

The Army's corps of substance-abuse counselors is hundreds short of the number of trained personnel needed. "I have been pounding the system to say we have got to sit down and determine what we need after eight years of war," Chiarelli said. That shortage has made it tougher "to handle what I think is a higher rate of substance abuse today than eight years ago." Why is it higher? "I think it's only natural you're going to see that as soldiers come back [from war], you know, with the dwell time that they have [before returning to war], that we're going to have a higher rate." Last week, Admiral Mike Mullen, Chairman of the Joint Chiefs, said pressure on the Army means that for the next two years, soldiers will continue to ship off to their next combat tour without sufficient rest at home.

The friggin Army is short of counselors..wow, that's a surprise right? Of course it's not..the Army is short of personnel period...that is why so many of these men and women on the front lines are on their third fucking deployment.They drink and they take drugs to deaden the mental pain...we are not stupid and neither are they. Who could sleep at night after the shit they see and deal with daily? I sure as hell couldn't. Bet none of us could. From another Time article on the same subject:


Army leaders say that broken personal relationships seem to be the most common thread linking suicides. "The one transcendent factor that we seem to have, if there's any one that's associated with [suicide], is fractured relationships of some sort," Lieut. General Eric Schoomaker, the Army surgeon general, told a Senate panel last month. What they fail to note, however, is the corrosive effect repeated deployments can have on such relationships. Ritchie pointed out in January that there are "higher rates of mental-health problems and marital problems for multiple deployers." (emphasis mine)

So the military leaders know what causes these problems..They friggin KNOW, yet multiple deployments continue unabated.

Obama will sacrifice them for his forever wars..and yes they are HIS WARS now. And it makes me physically sick. These soldiers are just collateral damage for Obama and his henchmen. How disgusting and maddening is that?
My old video below is from the Blogswarm in 2008 and it was specifically about Iraq..is sadly just as timely today as it was years ago when I made it. Just change out Bush's name for Obama's and insert Afghanistan now too.