Newt's daughter tries to clear his name w/regard to his FIRST divorce. 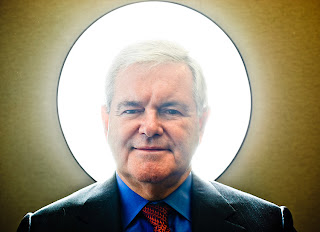 Newt has had more than his share of divorces and philandering's for such a self-righteous prick who dreams of one day sitting his ass in the Oval Office as President. He has ridiculous reasons for both issues. But to see that his daughter is now taking to writing in defense of her fathers version of the hospital incident, well... it smacks of political timing to me. From the Salon link above:


Regular readers will remember a few months ago I researched the story of Newt and his cancer-stricken first wife, also named Jackie. The anecdote has dogged Newt ever since Mother Jones first reported it -- and extensive evidence of his philandering -- in 1984. Cushman's column is likely part of a conscious inoculation effort. Cushman writes a syndicated conservative political column and recently co-authored a book with her father.

Cushman doesn't offer much in the way of details, besides saying that she was present during that 1980 hospital visit and that the media has repeated unspecified "untruths"

The question becomes: Should we believe Gingrich's wife from  five years after the incident, or what his daughter claims 30 years later when Newt is gearing up for a presidential run?

Any way you slice or dice this issue, Eye of Newt runs on the 'Family Values Platform'. He was a philanderer and a two-faced bag of batshit as he went after Clinton for something he was far more guilty of than the President.

He now uses the extreme right's favorite line that his god will forgive him his transgressions because Newt asked him to in an interview w/religious channel CBN on March 9th of this year. The video is available on their site but I haven't the stomach to post his fuckery here.

And the reason Eye of Newt didn't attend the Faux republican debate? Well, there are most likely at least two reasons: He was busy making money speaking of course. Plus, he technically had not announced his candidacy by that date, even though Faux had marketed that Eye of Newt would be on hand for their...cough..extravaganza..
This Bitchfest by Unknown at Saturday, May 14, 2011