Happy Mutha's Day! We are all muthas ya know.

If you care for a pet, if you adore a friend and you help them out by listening and giving them hugs when they need one...you are a Mutha too m'dear reader.

Because a Mutha, for me anyway, is someone that takes care of people, places or animals...makes sure everything is ok, and if it isn't, bitches her ass off until it gets fixed, or she will get it fixed and send you a friggin bill.

I called my Mutha this morning. The poor old dear has COPD with the added complication of end stage Emphysema. She lives in Missouri, so sadly I can't go see her and make her laugh..I can only call her and say things that crack her up.

She wanted to talk about OBL..i shit you not! So I listened as she told me that Clinton could of captured him. I asked her if the hospital only had Faux News, cuz where else would you get that bullshit. I reminded her that the Clinton administration warned The Shrub and his henchmen about OBL, but they chose to ignore it until that day in September when all hell broke loose.

To lighten up the convo..I asked her how hard would be to pick out a tall assed Muslim amongst a group of relatively short ones. She didn't get it...so I explained to her how tall OBL was and the general height of the majority of Muslim males. He would stick out like Shaq standing amongst a room full of 5'9" males. Anyway, I cracked a few jokes about OBL, The Shrub, Rumsfeld, The Big Dick Cheney and made her giggle.

I am the oldest of four female children my mutha gave birth to. My middle sister lives w/Mommy Dearest, so she was there at the hospital as well. Poor thing hangs out there more than any place else, including her humble abode or work lately. 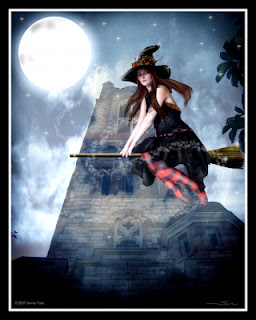 When MommyDearest is well, how to put this... she can be a real pain in the ass. I like to refer to her as a witch (sometimes with a B instead of a W) that comes complete w/a friggin broom that she uses either as transportation or to hit you with.

But today, I finally realized that those days are over and her actual days left on this earth are numbered.

I am getting a tad weepy, so it's time to go...call yer friggin Mutha and if she has already left this planet..talk to her like she was still here..sitting with you like the old days when she made everything better..or in my case..usually made it worse..but not always on purpose of course. Because above all else..Mutha's care. It might not always seem that way..but they do. Bless them all.
This Bitchfest by Unknown at Sunday, May 08, 2011