When is the last time your pay went up 11 percent in a year? 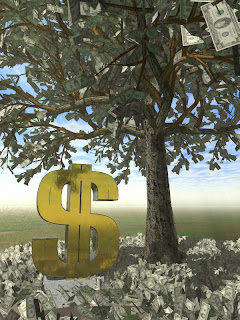 The answer in 99% of cases would be never or it's been years if not decades..but a helluva lot of the CEO's have hit the friggin motherload according to RawStory:


Compensation received by chief executives of the biggest US companies surged 11 percent over the past 12 months -- to $9.3 million on average, The Wall Street Journal reported.

Citing a study conducted for the newspaper by management consultancy Hay Group, The Journal said the increase was largely due to decisions by company boards to reward CEOs for strong profit and share-price growth with bigger bonuses and stock grants.

On this chilly Monday morning..it really made my friggin day. Especially considering that once again the Federal Government is refusing to provide the elderly and disabled with a COLA (cost of living adjustment) for the third straight year. To be fair, the top three spots were taken by media exec's. At least it's not the jackholes that got taxpayer funded bailouts at the very top. But I will wager that a lot of them are on the friggin list. RS didn't link to the WSJ article, but I am going to look it up and post it here later. The back is really fucked up lately and that bothers me as it's been two months since the surgery and shouldn't it be getting better at this point? 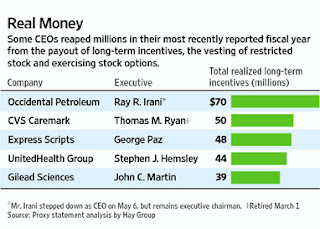 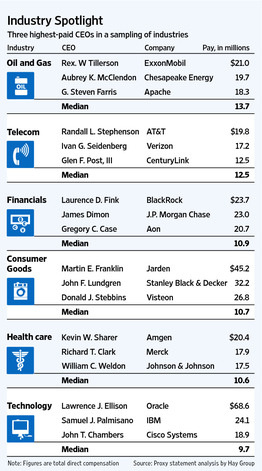